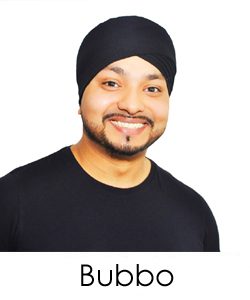 Bubbo is the founder of Dhol and Pipes who were also known as ‘Pipping Hot Dholies’ in the early 2000s when they introduced the idea of mixing the beat of a dhol to the sounds of bagpipes.

Since then, they have played globally with the exhilarating sound and beat of the Dhol Drum.

They are sure to get any party going from dance floor to a Bride and Groom walk in with the fusion of the Indian Drums alongside the Scottish Bagpipes.