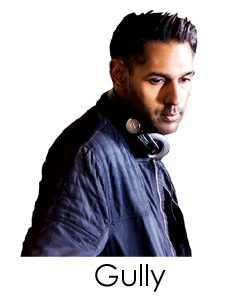 Gully, once known specifically only for his skills behind the decks now lends his voice to Channel 4 and E4 as a continuity announcer across the TV channels regularly featuring across peak time slots.

Still very much based in London, Gully worked his way up the radio ranks to land himself a job producing various BBC shows across Radio 1xtra and BBC Asian Network as well as presenting shows on Brit Asia TV.

Of course DJing still plays a huge part in his progression down south as he regularly features across the Asian Network and 1Xtra delivering his distinct multi-genre guest mixes for the likes of Mistajam, Sian Anderson, Nick Bright, Harpz Kaur, KanDman and DJ Limelight.

Not only has radio played a huge part in his rise, Gully remains active in the DJ circuit playing in guest slots across various nights in the city as well as being a regular performer at Nike’s European flagship store in Oxford Street.

The only logical step now is for the Glaswegian to land himself a national radio show and continue to interview the UK’s rising stars in his weekly podcast as well as the occasional red carpet interviews with some of Hollywood’s elite.