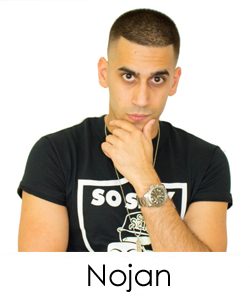 Since 2008 he has developed a unique style that sets him apart from the rest. Playing at some of the UK’s biggest nightclubs and events as well as going international, doing shows in Spain, Netherlands, Germany, Switzerland, Greece, Georgia and Turkey.

In 2016, his unique style earned him a spot as a guest DJ on some of the country’s biggest radio shows including BBC Radio 1Xtra (Charlie Sloth Show) and Capital Xtra FM (DJ Charlesy Show)

Although he is predominantly known for spinning Urban music, over past few years he has developed himself as an open format DJ, spinning anything from Oldschool to current House, Afrobeat, Funk and Soul.

With all his knowledge over the years, Nojan has his own show on BBC Asian Network where he blends all types of music together such as Middle Eastern, Hip Hop and Bollywood Vibes.