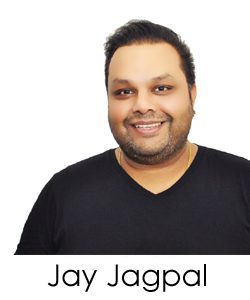 Since the very young age of 5, Jay Jagpal has always been involved in the music industry and known to many as “the man with many talents”, from the microphone to decks to a mixer in the studio.

Jay started at a young age, singing at school shows, later to become a drummer for local bands. From there on, Jay Jagpal went from drumming to Dhol playing. Dhol Playing merged into Djing & MCing were for many years Jay ran the Roadshow circuit, then joined up with DJ Bobby B to handle the Club Events as well as his renowned RJ on Awaz FM with late night Urban Bhangra shows.

Jay has already worked with some of the biggest names in the Asian music scene as well as the western music market. After releasing the no.1 smash hit single ‘Teri Tor Vekh Ke’ with Bobby B, he went onto working on Gtown Desi’s debut album which was completed in 2007, but not released until 2010. From there to the present releasing many more successful hit singles.

Over the years, Jay has performed internationally in Dubai, Marbella, Ayia Napa, Delhi and not forgetting all over UK. He continues to work on projects with his Gtown Desi colleagues as well as working on solo projects.