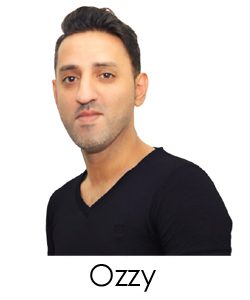 Ozzy initially entered the music scene in 1996. Formalizing his name with ‘Desi Krew DJs’, he successfully managed and navigated through various stages of the club and roadshow sector.

During his constant progression with the fabrication of Bollywood Mixtapes and several productions, he utilized his experience and knowledge in furthering himself into the medium of radio. Introducing the first ever ‘Urban Asian Radio show’ alongside Bobby B, Ozzy effectively exposed and initiated a market that was currently untapped. The show, ‘Desi Licks’ became an instant hit throughout Scotland.

At present, a gifted individual that holds many years of experience has now transferred his knowledge and ability over to the collective, ‘Gtown Desi’. With his familiarity of the past and current musical environment, Ozzy is no stranger to music.